Went to see The Imitation Game, and it’s pretty good!  Alan Turing was, of course, a seminal figure in computer science, and his imitation game, or Turing Test, provides an interesting way of thinking about artificial intelligence.

It turns out that I include a Turing Test in my novel Replica.  Here’s the setup: After an assassination attempt, President Randall Forrester has ordered the kidnapping of brilliant scientist Shana York so that she can create an android replica of him to take his place at public events.  Now she is holding a Turing Test to see if Forrester’s frightened aide, George Hunt, can tell the difference between the real president and the fake one.  The scene begins with Forrester confronting his replica, and continues with the test.

The door opened, and Forrester stood there, grinning. The grin disappeared as his eyes met those of his replica. Shana felt the android’s hand slip from her shoulder.

They looked like twins reunited after a lifetime—except there was no joy on their faces, only a kind of frightened fascination. Neither spoke.

“Do you still want the test?” Shana asked after a while.

Forrester glanced at her irritably, as if she had intruded on 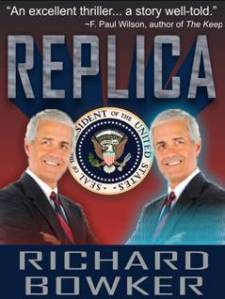 something that didn’t concern her. He managed a cold smile. “Of course. I just felt like spending a quiet moment ahead of time with my friend here. I must say he’s a handsome fellow.”

“You should check out the size of his ego, too.”

The smile didn’t waver. “That’s precisely the sort of thing I will be checking out,” he said. He advanced into the room. Shana had been obsessed with the man for so long that it wasn’t even disconcerting to be in a room with two of him. There could have been a dozen Forresters, and they would only have seemed natural projections of her state of mind.

Forrester went right up to the android, reached out a hand, and stroked his jaw. The android didn’t move. “He came from a scraping they took of the inside of my cheek,” Forrester said. “Is that a miracle or an obscenity? Both, undoubtedly. How does it feel to be an obscenity, my friend?”

Forrester looked at Shana. “What is he, the village idiot? That’s not the way I would act if someone insulted me.”

“He does what I tell him to do,” Shana responded. “If you want him to act like you, I’ll tell him to.”

“I see.” He turned back to the android. “If Ms. York told you to jump headfirst out the window, would you do it?”

Forrester laughed. “Ever get the temptation, Ms. York?”

“Yes, but I manage to remind myself that he isn’t you.”

“Of course. You know, I had you pegged from the start, Ms. York. But enough. Why don’t you run ahead while I make sure my friend’s tie is knotted properly and his hair is combed just like mine. I’m dying to find out how well George does in picking out his boss.”

Shana didn’t like leaving the android alone with Forrester, but that was stupid; soon enough she hoped to leave him for good. “All right. When you get downstairs, Randall,” she said to the android, “you are the president. Understood?”

Shana left them and went down to the hot, dusty parlor where Hunt was sitting in a wing chair covered with a graying sheet. “A few minutes,” she said.

He nodded, and they waited in silence.

When the two of them finally came downstairs, Shana could feel Hunt become tense. Twice as many Forresters to be afraid of. She tried to pick out the real one. She couldn’t. “Well, George, are you ready?” one of them said. “Be careful, your job depends on this.”

The other one said, “That was clever. That was really clever.”

The first one’s smile faded a little. “Don’t patronize me, you zombie.”

“Oh, I get it—you pretend you’re me losing my temper. Too facile. You’ll have to do better than that.”

The first Forrester swiped at the dirty sheet covering the couch and sat down. “I don’t see why we have to do this in filth,” he muttered. “Come on, George. We’ll stop bickering if you ask us something penetrating and clever.”

Shana turned to Hunt. He looked as if he were about to become ill.

“Tell me about our education policy in the second administration,” Hunt offered.

“Oh, George, how dull. You helped write the plank, of course. For one thing, we’re going to propose a stiff tax on automated equipment designed to replace humans. We’ll use those funds to establish retraining programs for laid-off workers. We’ll also provide bonuses and other incentives for people who retrain as teachers. That way, we’ll provide both a disincentive for layoffs and a boost for education.”

“He could’ve got that answer out of The New York Times, George,” Forrester-on-the-couch remarked. “You and I know what we’re really up to. These disincentive laws are just window dressing. If we get the kind of majorities in Congress we expect—”

“I see the game,” Forrester-standing-up interrupted. “Take whatever I say and go it one better. Why don’t you ask him a question and let me act smug and superior.”

Forrester-standing-up turned on Shana, the veins in his forehead bulging. “Is that all you’ve managed to accomplish here—to teach this thing how to insult me?”

“Bravo!” the seated Forrester shouted. “What you’ve actually taught him is a good imitation of me with my dignity wounded.”

“Oh, now you’ve got him judging my performance.” He mopped his brow. “Come on, George. The test is over. Surely you can make up your mind by now.”

“Now he’s acting decisive and presidential, George. ‘The war is over and I’ve won.’ Notice that the creature still hasn’t shown that it knows anything. Keep going, George. Ask obscure questions. Probe. You can do it.”

“Don’t let him browbeat you, George.”

Hunt looked at Shana. “I can’t stand any more,” he said.

“You don’t know which is which?”

“What do you mean you don’t know?” they both shouted in unison.

Shana walked behind the two Forresters, who both turned and glared at her. She put her hands behind each one’s head. When she touched the one who was seated, he suddenly smiled, and she smiled back. She gave a slight tug, and he slumped forward. She held out the cartridge to the one who was standing up. “Here you are, Mr. President,” she said. There was the slightest emphasis on the word you.

The room was silent. Forrester ignored the proffered cartridge. Shana stood behind the android, her free hand on his shoulder. He was soaked with sweat, and so was she.

Then Forrester started to laugh, so loud the furniture seemed to vibrate with his merriment. “You really couldn’t tell, could you, George?”

“Well, the joke’s on me, obviously. Fifty-four years of developing a personality, and here Ms. York comes along in a few months and duplicates it. What do you think of that, George?”

“Suddenly modest, are we? Most commendable. Anyway, you’ve done it. So let’s get started, shall we, George?”

“Why not? Let the android give that damn speech in St. Louis tonight. What’s after that?”

“Breakfast meeting in Atlanta, news conference at the White House.”

“I should do the news conference, I suppose. I can come back here for the substitution, and you can update me on what went on. Any problem with that?”

Hunt shrugged and looked at Shana. “Can you get him ready?”

Shana breathed deeply. “It’ll take a while. I’ll have to implant some memories to give him a reason for being here. Any ideas?”

“Oh, George brought me here to check the place out for campaign strategy sessions,” Forrester suggested. “Can you make him believe that?”

“If you give me some time.”

“Yes, well, George will wait for you. I have better things to do.”

“And afterwards I’m free to leave?”

“Oh, of course. I’m sure George has worked it all out. And, Ms. York, let me just say how much I’ve enjoyed our little meetings.”

“You’re too kind,” Shana replied. She bent down and reinserted the cartridge in the android’s skull. “Let’s go upstairs,” she murmured to him.

“And don’t jump out any windows, my friend,” Forrester added. “I need you.”

The android ignored him and followed Shana.

Okay, it’s not exactly the way Turing imagined it.  But, hey, it’s a novel!

1 thought on “My own Imitation Game”