Here are the jellyfish, in Burlington City Hall Park.  Why they are there, I haven’t a clue. 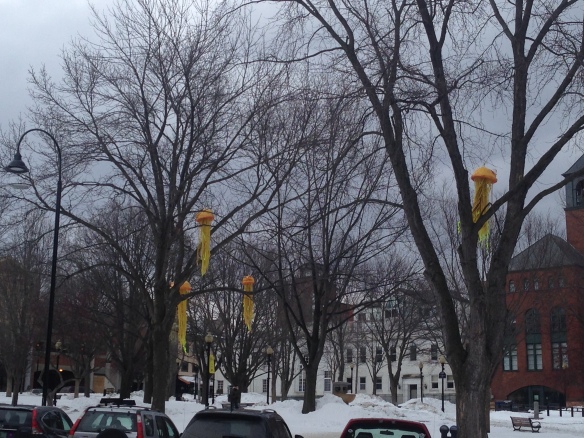 The Irish music was provided by Danu at the Flynn Theater.  Here they are, singing a gorgeous ballad they also performed at the Flynn:

(This video isn’t embedding–sorry. WordPress is letting me down.)

And here are the beautiful people, at the Skinny Pancake on Lake Champlain:

Well, maybe the guy on the right could use a haircut.

That would be the second movement of Beethoven’s piano sonata Opus 111 — the final movement of his 32nd and final piano sonata.  Here is what a couple of pianists say about it:

The pianist Robert Taub has called it “a work of unmatched drama and transcendence … the triumph of order over chaos, of optimism over anguish.” Alfred Brendel commented of the second movement that “what is to be expressed here is distilled experience” and “perhaps nowhere else in piano literature does mystical experience feel so immediately close at hand”.

Andras Schiff, in his lectures on the Beethoven piano sonatas, finally runs out of words (acceptance, forgiveness) to describe the last few minutes of the sonata, and can only play the music.  At some point after the first few variations in the final movement, the music takes off into another realm of spirit and meaning, leaving language behind.

Perhaps the most moving piano recital I ever attended was Rudolf Serkin late in life playing Beethoven’s Opus 109, 110, and 111 at Symphony Hall.  He played the 111 after the intermission, and that was it.  No encores.  Just 25 or so minutes of music — after the arietta, there was nothing left to say.

Here is Claudio Arrau playing the sonata in Bonn in 1977, when he was over 70.  Looks like the air conditioning was broken, because the sweat pours off him.  No matter.  I heard Arrau play about a decade later, and he was moving so slowly I thought he’d never make it to the piano.  His tempi were also slow, but he made them work.

Here we are on the 50th anniversary of Kennedy’s assassination — a time for funeral marches. But at some point you have to get past the funeral marches — and Opus 111 is where you need to go — the triumph of optimism over anguish.

Van Cliburn died today.  I remember as a kid being confused because he didn’t seem to have a first name; the only other “van” I knew was Ludwig van Beethoven.

Here he is in Moscow back in 1962 playing the leave-no-prisoners finale of Tchaikovsky’s first piano concerto with Kiril Kondrashin and the RCA Symphony.  (He won the Tchaikovsky Competition four years earlier.)  We get a glimpse of Nikita Khrushchev applauding from a box at the end.

I didn’t read Keith Richards’ Life, but my lovely wife did.  She loved it, which means I had large chunks of the book narrated to me.  I particularly liked the story of the Rolling Stones’ manager, Andrew Oldham, locking Richards and Mick Jagger (then both 21 years old) in the kitchen of their apartment and not letting them out until they had written their first song.  He thought the Stones had to expand beyond covers, as the Beatles had done.

What they came out of the kitchen with was a sweet little pop ballad called As Time Goes By.  Not Stones material.  Also, turned out there was already a song called As Time Goes By.  Who knew?  So Oldham changed the title to As Tears Go By, and they gave the song to the incredibly young Marianne Faithfull.  Here she is singing it in 1965 (aged 18).  Was she told not to move an inch during the taping?

Here is the Stones version, which was released as the B-side of 19th Nervous Breakdown later that year.  Jagger sings, Richards plays the guitar, and there is a string section; the rest of the Stones are nowhere to be found.