Coming in ebook on April 2! In paperback now! 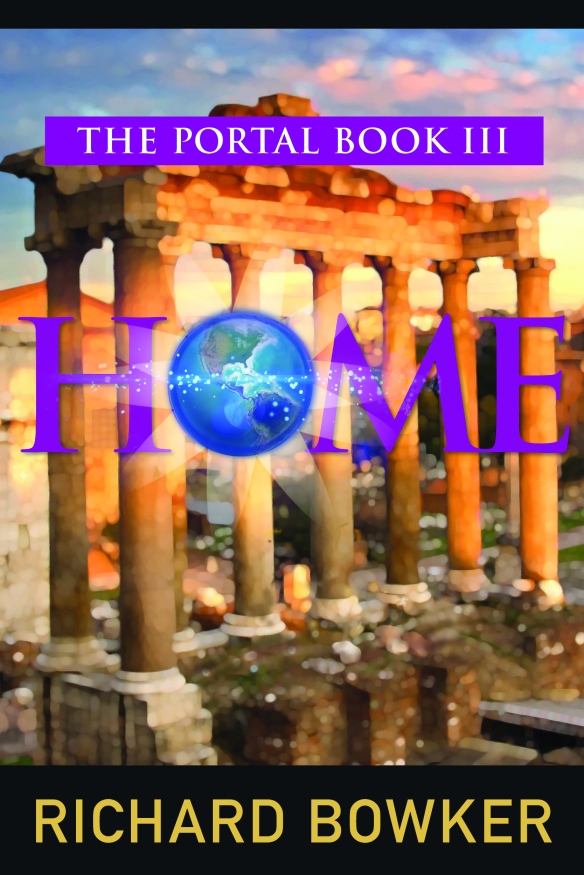 In this powerful sequel to Portal and Terra, Larry Barnes discovers that he has an amazing and dangerous power: he can create his own portal to take him to other universes. As he learns how to use this power, he faces the most important decision of his life: Should he return to Earth, or should he use the portal to save Terra—and the girl he loves?

Here’s the prolog to Home:

Lamathe heard the news first from Samos, who pounded on his door in the early morning, desperate for admittance. Surely what Samos told him couldn’t be true, Lamathe thought. Perhaps he was still asleep, and this was a particularly bad dream. Perhaps Samos was mistaken; he was young and a bit of a hothead—maybe he’d gotten the story wrong.

But Samos had not gotten the story wrong. One priest after another showed up at Lamathe’s house, in a small castella not far from the center of Urbis. All were distraught, disbelieving, horrified. All told the same story.

Urbis—the holy city of the Roman empire and the site of Via, its most sacred object—had been invaded during the night. The invaders had raided the armamentarium and obtained its gants, and with those powerful weapons they could destroy anyone and anything. The soldiers’ barracks and the palatium were ablaze; people were fleeing the city in panic. The pontifex’s palace had been taken, and that meant Tirelius and his associates were dead or in the invaders’ hands.

And the temple of Via itself?

Yes, it too was theirs. No one had returned from the sunrise service at the temple. Those who had attended the service were likely dead or prisoners as well.

Who were the invaders? How had this happened?

And what was to be done now?

The priests looked to Lamathe for wisdom and guidance. And Samos was the one to ask him the obvious question: “Is Affron responsible for this?”

For months the priests had talked of little besides the struggle between Tirelius and Affron for the soul of Urbis. Tirelius had finally arrested Affron and sentenced him to death. But on the eve of his execution he had been freed from his jail cell in the palatium and, along with others, escaped from the city. He had not been seen since.

Lamathe had supported Affron, but he was not a rebel. He had tried to make peace between Affron and Tirelius, to no avail. And now this. “It is not Affron,” he asserted. “I would stake my life on it. You all know him. Would he sneak into Urbis in the middle of the night? Would he kill our soldiers to seize power? He doesn’t even want power. He just wants to be left alone.”

“Who then?” Samos demanded.

“I don’t know. The Gallians? They have reason enough to hate us.”

“It doesn’t matter,” Borafin replied. Like Lamathe, Borafin was a viator—one of the priests allowed to use Via to travel to other worlds. “We have to leave. If we stay, we’ll be captured or killed.”

“I’m willing to die for Via,” Clovis announced. Another young priest.

“What is the point of dying?” Lamathe responded mildly.

“It’s better than running away.”

“Some of us must survive,” Honoria said. She, too, was a viator. “The time will come when we will be needed.”

“We are needed now,” Samos retorted. He wouldn’t have dared to speak to Honoria that way in normal times.

Lamathe tried to make sense of it all. Whoever the invaders were, however they had managed to enter Urbis, they were here. And with the gants, they could not be defeated. And so…

“We must stop them from using Via,” he said.

“How can we do that?” Theodosius, another viator, asked. “They possess it. It’s theirs.” He was close to tears.

“Without Affron or another viator to teach them, they will try to use it, and it will defeat them,” Lamathe replied. “It took us all years of training to master it.”

“But they have Tirelius, if they haven’t killed him,” Clovis pointed out. “They may have captured other viators as well.”

“No viator will give up the secrets of Via to an enemy,” Honoria replied.

“But there is the schola,” Borafin murmured. The schola—where young men and women studied for the priesthood and learned those secrets.

“Yes, the schola,” Lamathe said. “The books there will tell them all they need to know.”

“We must destroy the books!” Samos cried.

“What if the invaders have captured the schola?” Karellia asked. She was not a viator, but someday she would have been, if not for what had happened during the night.

“Perhaps they haven’t,” Lamathe replied. “In any case, that is where we must make our stand.”

“And if we succeed?” Theodosius asked. “The invaders will still control Urbis, and the empire.”

“Then, as Honoria says, we must survive—and prepare for the moment when we are needed.”

“When will that be?” Clovis asked.

“I do not know,” Lamathe replied. “Tirelius has many flaws. Each of us has flaws. But whoever these invaders are, they will not rule as wisely and justly as we have ruled. The time will come when people will understand this and long for our return. We must be ready. Now come, there’s no time to waste.”

The priests returned to their own houses and changed out of their colored robes to make themselves less conspicuous. They then filled jugs with lamp oil and lugged them back to Lamathe’s house. Samos had obtained a horse and cart somehow; they loaded the jugs into the cart and finally set off for the schola.

Lamathe still could not believe this was happening. They were about to set fire to books that had been studied for generations—the accumulated wisdom of Hieron and all who had come after him. And if they couldn’t succeed in burning them, they would die trying.

Yet it was the right thing to do.

He looked at Honoria; she had tears in her eyes. “This is awful,” he said.

“Do you think the Gallians are responsible?”

She shook her head. “I don’t know. It makes sense, though.”

The Gallians had rebelled decades ago, and the priests had used gants to defeat them. But they had been loyal enough since then. “King Carolus wouldn’t try something like this,” Borafin said.

“Perhaps he’d do it if he knew it would work.”

They fell silent as their journey continued. Along the way a few other priests joined them. It felt like a procession. They skirted the main road and approached the schola from behind. Students were milling about on the playing field, looking dazed. When they spotted the priests they surrounded them, begging for news and guidance.

The enemy had not attacked the schola, it turned out. Everyone was safe. So that was good news. Lamathe had to give the students the bad news. He pointed to the cart laden with the jugs full of oil. “We cannot let the schola fall into the hands of the enemy,” he told them. “We are here to burn it down.”

The students were stunned. They wept. They protested. They begged for a different solution. Like Samos, they wanted a call to arms. Their lives here were just starting, and now Lamathe was telling them those lives were over. They might never become priests or viators. They might never see Urbis again.

But Lamathe would not relent, and the students did as they were told.

Everyone brought jugs into the schola and up to the library where they had spent so many happy hours. Shelf upon shelf of wisdom, reaching up three stories. Lamathe had grown up in Alexandria and had spent many happy hours in its great library, but he knew that many of the books there were filled with nonsense. Here was the truth, of this world and many others. And above all the truth of Via, which provided the entranceway to all those other worlds.

How could this wisdom ever be replaced?

He and the other viators went into the special locked room containing the records of every journey they had taken to other worlds, back to the days of Hieron. They doused the records with oil and departed.

When everyone was back outside, the sun was setting; this felt appropriate. And it was left to Lamathe to take a torch, go inside the schola one final time, and set it ablaze.

He came out afterward and joined them all as they watched the smoke start billowing out of the schola’s windows. No one spoke until finally Samos said, “Whoever they are, I will kill them all.”

Lamathe put his arm around the young priest’s shoulder, and Samos turned and sobbed uncontrollably into the viator’s chest.

And in the gathering darkness he explained his plan.