Great weather!  Great seats!  Great excitement, as the Red Sox have all New England a-twitter after a wonderful start in their first six road games!

OK, that last sentence was a lie, but the first two weren’t.

Had to park far away.  They seemed to be preparing for a running competition of some sort. Lots of fit-looking folks in track suits wandering around Copley Squere.

They were even preparing to pray for the runners:

Old South Church bills itself as the “church of the finish line.”

Here’s a guy celebrating a pitcher of yesteryear:

Here’s the Muddy River, which looks a lot better in a photograph:

The 100-year anniversary celebration is next Friday:

Where is our third-place banner from 2011? 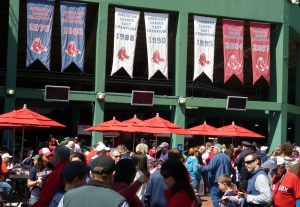 Buddy?  Who’s Buddy?  Even the lady holding the sign doesn’t seem sure:

He is locked in a tough reelection fight against a popular Democratic opponent.  Hey, there might be a novel in that!

The seats were ten rows back — the fancy seats where the vendors actually bring beer to you.  Here’s the view:

Fenway now has three Jumbotrons; each displays player statistics with a faux Fenway scoreboard background. On the John Hancock scoreboard, we’re looking at a video of the immortal Dave Morehead.

Here’s the aftermath of the injury to Ellsbury.  It didn’t look that bad from far behind home plate:

They flash the words to “Sweet Caroline” on the scoreboard.  Have they always done that?  Why bother?  (Well, they flashed the words to “God Bless America” as well, but the girl singing it still had problems.) 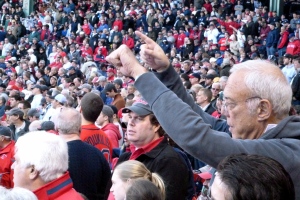 Oh, the game.  Beckett was very efficient — only struck out one, but got the Rays to hit a lot of fly balls.  David Price for Tampa Bay was extremely inefficient, despite consistently hitting 97 mph on the gun.  He was gone after three innings.  The hitting star for the Red Sox was the immortal Kelly Shoppach; he even managed to steal the first base of his career on a weird delayed steal.  The Red Sox put ten men on in a row in the bottom of the eighth and scored eight runs to seal the victory.  Final score: 12-2.

I was tired of taking photographs.  Here’s Trinity Church with the Hancock Building in the background: