Update: In comments, Jeff provides the magical link to Senator in the iTunes library.  He also reminds me to tell folks to go to the Senator page on Amazon and inform them that you’ve found Senator for a lower price elsewhere.  That’s how a book gets to be free for the Kindle–you can’t just tell Amazon to give it away.

The four novels I have so far released in ebook format are now available on Apple’s iBook store.  Yay!  I don’t know how to link to these guys, but here’s what they look like in iTunes: 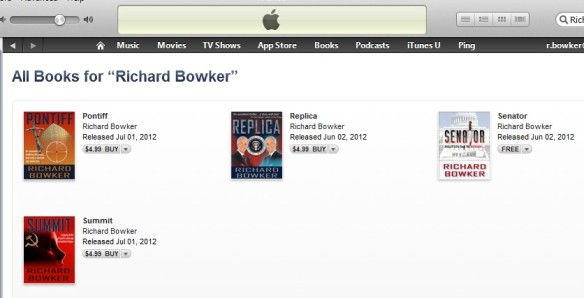 Eagle-eyed readers will notice that Senator is free.  That’s right–for a limited time only, it’s available for insanely low price of zero dollars and zero cents.  That’s pretty darn cheap!  At this price, quantities can’t last, so you’d better pick up yours quickly, before Apple runs out.

For those of you who picked up Senator at a higher price, my apologies.  As I noted here, we’ve made some changes to our business model.  I’m using an outside publisher to get my stuff onto sites like iBooks, as well as to goose sales generally.  A standard way to do that is to give a book away and get people hooked so that they’ll buy the others.

Anyway, here is the great (and tragic) Phil Ochs singing his great song “Changes,” just a couple of years before his death.  In a kinder, fairer world, Phil Ochs would have been as long-lived and honored as Dylan.