A friend sent me a link to this article, noting that “someone has been reading your book.”

“The election for U.S. House for Oklahoma’s 3rd District will be contested by the Candidate, Timothy Ray Murray,” Murray wrote in a press release posted on his campaign website. “I will be stating that his votes are switched with Rep. Lucas votes, because it is widely known Rep. Frank D. Lucas is no longer alive and has been displayed by a look alike.”

On the website, Murray claims that Lucas and “a few other Oklahoma and other States’ Congressional Members,” were executed “on or about” Jan. 11, 2011 in southern Ukraine.

“On television they were depicted as being executed by the hanging about the neck until death on a white stage and in front of witnesses,” the website claims. “Other now current Members of Congress have shared those facts on television also. We know that it is possible to use look alike artificial or manmade replacements, however Rep. Lucas was not eligible to serve as a Congressional Member after that time.”

The book in question is my novel Replica, whose basic plot is evident from its cover: 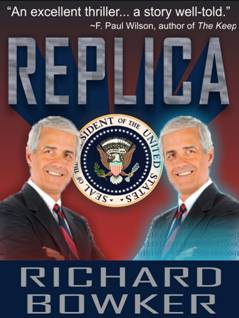 Replica was by far the most successful of my novels when it was first published. So far it hasn’t gotten much love as an e-book. Is it the cover? The price? It’s a pretty good book!  Here’s what Publisher’s Weekly said when it came out:

While maintaining a highly readable pulp-fiction style, Bowker takes the narrative through a gripping array of turnabouts, doublecrosses and twists.  Readers will be guessing the story’s outcome until the very end.

And here’s a customer review:

I’m not sure exactly what I expected when I bought this book, but I didn’t expect it to explore terroristic politics, development of artificial intelligence, and some of the challenges of AI/human relationships … all without becoming bogged down in the esoteric nature of the technologies involved.

It starts out more or less the way I thought it would, with various entities coming together to make it possible (and plausible) to substitute the President with an android. Almost everything after that, though, was a surprise … with plenty of twists and turns and misdirections and characters developing in ways you probably won’t expect.

This is a good read, and amazingly so given how long since its original publication. It’s not too often that near-future books involving technology or politics (and especially a combination of the two) are written such that they don’t become badly dated in a decade. This one is still fresh, a fun read.