Hey, this is my 500th post on this stupid blog!  At first I was trying to do a post a day, but I’ve slowed down to two or three times a week since I began a new novel.

Thanks to WordPress’s comprehensive statistics, I can tell you that my most popular post ever (by a wide margin) was, oddly enough, this one about my visit to the real Mystic Pizza.  In second place was my post on organic plots.  And the bronze medal goes to this silly post on the Higgs Boson and smoking ducks.  Do you see a trend here?  No, neither do I.  Wordpress doesn’t track “likes”, but I’m pretty sure I got my most likes for this little post passing along a letter to the editor about the Middle East.  I put a lot of effort into that one!

Given the reaction to my last couple of posts, I probably should be doing a lot more Jane Austen blogging.  Maybe I should be writing Jane Austen novels.  If only I could.

Next year will be the silver anniversary of the release of the movie Mystic Pizza, and we got a head start on the worldwide celebrations by taking a trip down to Connecticut to see the original pizza shop that inspired the movie, still doing business under the same ownership.

We re-watched the movie the night before our trip.  It works about as well as it did first time around.  Cute, endearing, occasionally pretty funny.  It was never especially believable, and the passage of time hasn’t helped this much.  You give the babysitter a glass of wine before she drives home — really?  You’re starting at Yale in a couple of months and you still don’t know how you’re paying for it — really?

None of the stars made it big except, of course, for Julia Roberts.  And then there was the baby-faced Matt Damon in his first movie role, showing up for about ten seconds and one line.  But he nailed it!  Everyone has had reasonable careers, though, especially Vincent D’Onofrio and Conchata Ferrell.

Anyway, here is what the Mystic River looks like, facing downtown from the Mystic Seaport Museum: 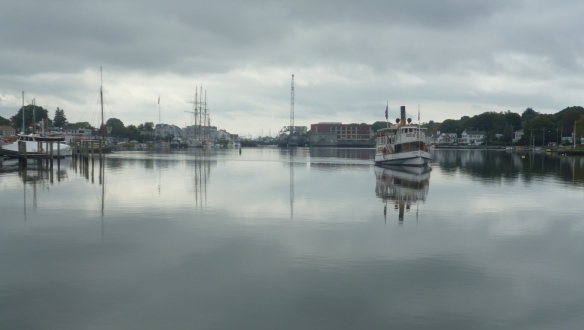 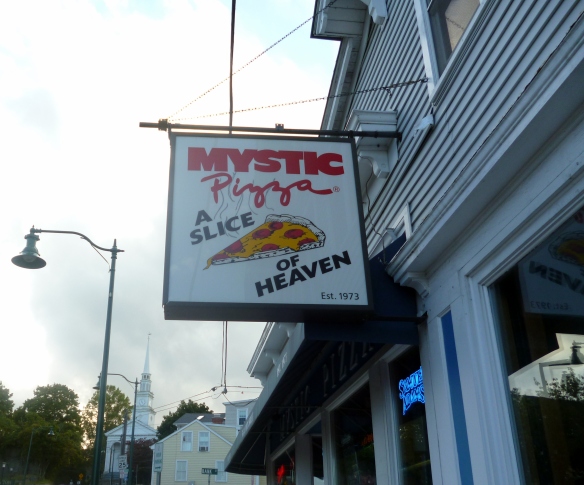 The movie didn’t use the actual pizza shop, you’ll be sorry to learn.  If you want to really get into the specific locations used in the movie, you need to go to this amazingly encyclopedic post on the site Road Trip Memories.

Here’s the interior of the current pizza shop. The movie appears to run on a continuous loop on the back wall.  When I took this photo, the final scene of the movie was playing, with the three girls on the back deck of the pizza shop after the wedding.  Moments later, we were back to the opening credits.  I imagine that may quickly get old for the employees. 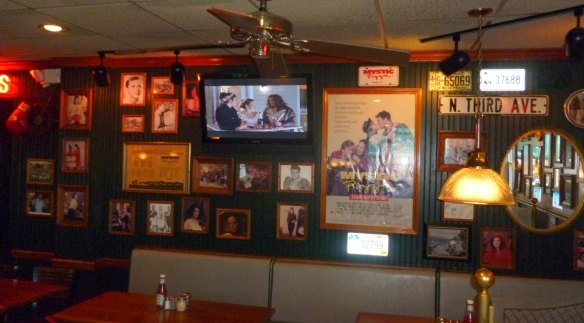 Here is a scene of the interior used in the movie itself:

At the real Mystic Pizza, the pizza is great; the t-shirts, not so much.

And here is Van Morrison with the last word: