I was walking from the Boston Common over to Jacob Wirth’s after my road race when I ran into this guy with his pet raven at twilight:

Poe’s reputation has risen since his death and stays high. In addition to being a writer of fiction and poetry, he was also a good literary critic.  Here is Wikipedia summing up Poe’s opinion of our old friend Heny Wadsworth Longfellow:

A favorite target of Poe’s criticism was Boston’s then-acclaimed poet, Henry Wadsworth Longfellow, who was often defended by his literary friends in what was later called “The Longfellow War”. Poe accused Longfellow of “the heresy of the didactic”, writing poetry that was preachy, derivative, and thematically plagiarized. Poe correctly predicted that Longfellow’s reputation and style of poetry would decline, concluding that “We grant him high qualities, but deny him the Future”.

“We grant him high qualities, but deny him the Future” — is that prescient or what?

Here’s more about the Poe statue.

The road race, you ask?  Don’t ask.  Here’s a photo of the pack going into Kenmore Square. 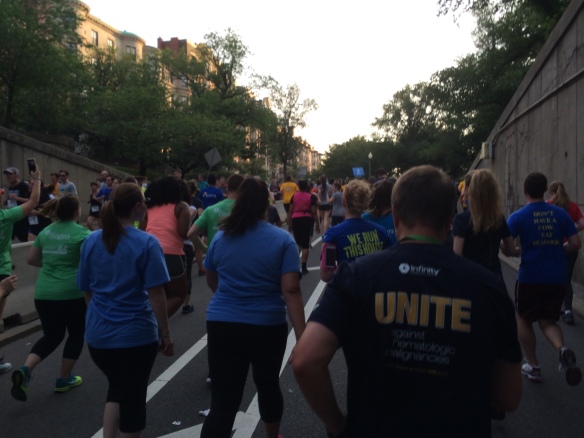 Notice that my part of the pack isn’t exactly “running”. The folks heading in the other direction, back from Kenmore Square toward the Common–they’re running. Sheesh.

4 thoughts on “In which I run into Edgar Allen Poe”