After My Name is Lucy Barton I decided it was time for something different, something manly.  No one is more manly than Jack Reacher.  So I tried the latest in the series, Make Me. I soon started getting that sinking feeling when you realize that the Jack Reacher novel you’re reading is just like all the other Jack Reacher novels.  A setting deep in the heartland, far from the police.  Personality-free female sidekick.  A dark conspiracy that, 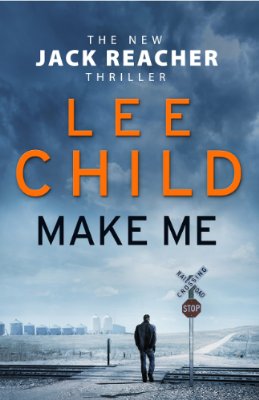 when finally revealed, makes little sense.  A super-villain with no name, no past, no particular motive for his bottomless evil. Complicated set pieces in which Reacher kills or maims multiple foes due to his understanding of firearms, fighting, human psychology, etc.

Maybe I need to go back to the beginning with Jack Reacher.  I’ve read about half a dozen of these books, and the best of them was The Enemy, an earlyish novel written in the first person and set back in the time when he was still in the military, before he began his lonely wanderings blah blah blah.

In the meantime I have started re-reading Emma by Jane Austen.  No sinking feelings so far.

I liked One Shot,  the first Jack Reacher novel I read.  So I decided to try another — A Wanted Man.  I listened to this one.  And I was disappointed.

The narrator, Dick Hill, was fine, although he couldn’t do females very well.  He was hampered by a plot that required Reacher to talk with a broken nose, which got boring after a while.  Another problem — again, not the narrator’s fault — is that Child did a Dan Brown-worthy research dump in this novel, and I was desperate to skim through the unnecessary prose.  Did I really need to know how Denver got its name, when not a single scene in the novel actually took place in Denver?

But I had bigger problems with the story line.  One Shot was crisply plotted, I thought, even if the central mystery turned out to be pretty dull.  A Wanted Man aims higher — it involves the CIA and the FBI and Arab terrorists and what not.  But at some point we find out that pretty much everything that happened in the first, exciting part of the novel was in fact completely pointless. And when the solution to the mystery is finally revealed, it turns out to be completely idiotic. The Arab terrorists are doing something in a suburb of Kansas City that they could have done just as easily in a suburb of Mogadishu.

My biggest problem, though, was that once again all the plot machinery seems to have been put in place to give Reacher a chance to sneak into a secluded compound in the dead of night and, against impossible odds and perfectly legally, kill a bunch of bad guys in a bunch of interesting ways.  Is this how every Jack Reacher novel works?  I realize that genre novels in a series are supposed to be somewhat repetitive — that’s part of their appeal.  But I need a little more variety than this.  In addition, Child didn’t bother doing any characterizations of the people Reacher is killing, so the carnage feels much less consequential than in One Shot, where he gave us point of view scenes for most of the victims.  Finally, he pulls an “I could kill you now, Mr. Bond” with the hostage Reacher is saving — there is absolutely no reason for this guy to still be alive (and therefore no reason for Reacher to be risking his life to save him).

Blecch.  Someone please point me to a better Jack Reacher novel.  I’ll give him one more chance.