I just read Jerry Coyne’s Faith vs. Fact about the incompatibility of religion and science. The arguments will be familiar to anyone who frequents Coyne’s website Why Evolution Is True. The book is a full-throated endorsement of science (broadly construed) as the only way we have of finding out what is true.  That “broadly construed” is important to Coyne’s case; it’s not just “scientists” who do science, in his formulation; a plumber does science when he makes a hypothesis about why a pipe is leaking, tests the hypothesis, and either confirms or rejects it.  That’s the way we achieve truths about plumbing and, Coyne suggests, about anything.  Religion (or listening to Beethoven, or reading Shakespeare) can’t tell you why a pipe is leaking, or how the universe began, or what causes malaria.

It also doesn’t help you solve crimes.  My novel Where All the Ladders Start is, among other things, about the private eye as scientist.  Our hero, Walter Sands, is investigating the disappearance of a cult leader.  There are conventional explanations–the guy was murdered, or kidnapped, or just took off on his own.  But there is also a religious explanation advanced by many cult members: God loved the guy so much that He assumed him into heaven.  Walter is not impressed by the religious explanation, however.  He is relentlessly practical: private eyes aren’t interested in miracles; they’re interested in people — in means, motive, and opportunity.  So he does what private investigators do: he searches for facts, and eventually he uncovers the non-miraculous truth.

That’s all well and good, but there’s a bit of a twist at the end (in a private eye novel, there’s always a twist at the end).  Walter uncovers the truth, but he can’t escape religion’s clutches.  Because, he is told, in everything he has done, he has actually been following God’s plan.  And he finds himself unable to dispute this, because, really, how can he?  How can anyone?  If God has a plan, a private eye is not going to uncover it.

(For those not of a certain age, “Just the facts, ma’am” is a catchphrase associated with no-nonsense Sergeant Joe Friday of the 50’s (and 60’s and 70’s) TV show Dragnet.  Snopes tells us, though, that the character never says exactly that.)

While I’m shilling for my books here, I should mention that the first book in my Last P.I. series, Dover Beach, is available on Amazon for a mere $0.99.  That’s like almost free!  The idea here, of course, is to get you into the series so you’ll buy Books 2 and 3.  Did I mention that Book 3, Where All the Ladders Start, is available now? 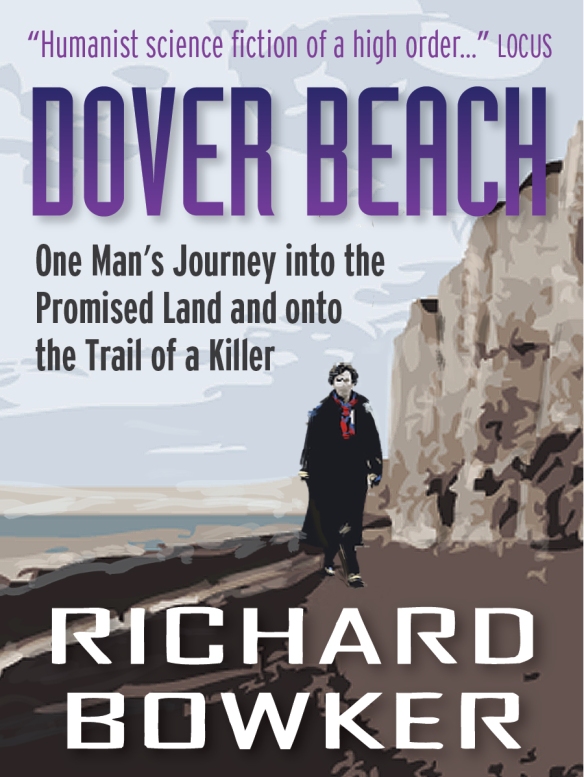 (There’s a certain amount of snow in Dover Beach, as I recall, but it’s not that bad.  Really it isn’t.)

Richard Bowker presents an awesome look at the role of a P.I. in a post-apocalyptic world. My first reaction was what on Earth would the remains of society need a Private Investigator for—it’s unlikely a P.I. would be hired to checkout phony insurance claims when there ain’t no more insurance companies. Richard builds a compelling plot with polished nuances sparkling for the reader. The plight of the survivors in Boston is rather frightful. The contrast between the shattered United States and merry old England is striking. He provides a nicely developed depth to his cast of players, and with all things considered, their surroundings are believable. I liked how he addresses real world money issues and there isn’t a P.I. with a pocket full of cash—but a meal at a London McDonalds is affordable. Richard did a marvelous job of resolving all the dangling loose ends—including a few dangling parts the reader doesn’t suspect are dangling—so to speak.

My new novel Where All the Ladders Start is out on Amazon, Barnes & Noble, Google Play, and other fine ebook retailers.  For those of you who haven’t been paying attention, it’s the third book in my Last P.I. series, which also includes Dover Beach and The Distance Beacons. In this one, our hero, Walter Sands, investigates the disappearance of the charismatic leader of the Church of the New Beginning. Twists and turns ensue, along with lots of humor and a few Deep Ideas. 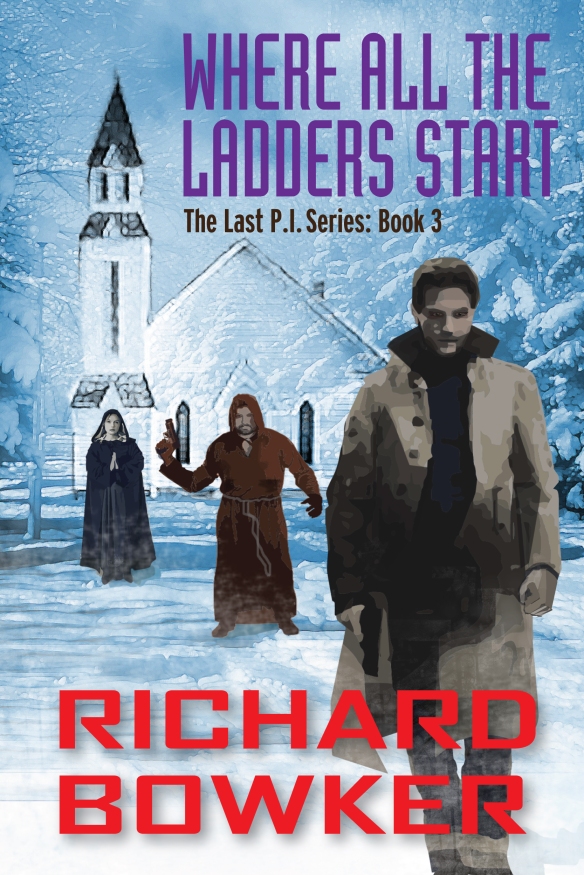 (Note to local readers: even though there is snow on the cover, no shoveling takes place in the novel, and only a small amount of dangerous driving.  This is the nice kind of snow, not the kind of never-ending, soul-destroying snow that is falling as I type these words.)

The ebook is priced at a mere $4.99.  A print version will be available shortly.  If you want a print copy, let me know and I can send you an autographed copy at a discount.

Two readers have already left reviews of Where All the Ladders Start.  Here’s the first, which was up before I even knew the book was available:

it may seem like hyperbole but I LOVE the characters and ideas that roam the world they are set in, and so should you. give this a try!

And here’s the second:

Most excellent.
I look forward to the next in the series.

So I really don’t see why you don’t just go buy the book right now.  You don’t even have to go out into the snow!

I have looked at the novel I’ve been working on in all different seasons, at all different times of day, and I have finally decided its title is Where All the Ladders Start.  Readers of a poetical persuasion will recognize the quote from the ending of the Yeats poem The Circus Animals’ Desertion:

I must lie down where all the ladders start
In the foul rag and bone shop of the heart.

Deciding to give the books in my Last P. I. series titles lifted from poems is one of the many ways in which I strive to be a commercial failure.  Couldn’t I have come up with something clever — liking naming them after numbers, or colors, or letters of the alphabet?

Anyway, I am declaring the novel “pretty much done.”  So you’ll have a chance to take a look at it before very long.

Beyond basic writing skill, the quality fiction writers need most is empathy.  You need to get deep inside the characters you write about and understand what makes them the way they are. This doesn’t mean that all your characters need to be sympathetic.  You can have villains–but villains without interesting, understandable motivations belong in comic books.

And of course the goal is to make your readers understand what you understand, feel what you feel. Here‘s the novelist Jane Smiley recently in the New York Times:

Reading fiction is and always was practice in empathy — learning to see the world through often quite alien perspectives, learning to understand how other people’s points of view reflect their experiences.

(I can’t really keep up with Jane Smiley’s output, but I can really recommend Moo and A Thousand Acres. Ten Days in the Hills, not so much.)

As a writer, I have thought a lot about politicians in my time, and it seems clear to me that a successful politician also needs to be empathetic.  Or, at least, he (or she) has to be really good at faking empathy.  This is somewhat tricky at the presidential level, where the candidates tend to be wealthy, accomplished, and far removed, at least in their personal lives, from the problems that confront everyday voters.  But of course presidential candidates are also supposed to be pretty good politicians.

Mitt Romney’s speech to campaign donors is shocking because it is such clear proof that he is utterly lacking in empathy for ordinary, struggling people. Here is Ezra Klein:

The problem is that he doesn’t seem to realize how difficult it is to focus on college when you’re also working full time, how much planning it takes to reliably commute to work without a car, or the agonizing choices faced by families in which both parents work and a child falls ill. The working poor haven’t abdicated responsibility for their lives. They’re drowning in it.

Way before this latest incident, The New Yorker commented on Romney’s empathy problem:

But it’s getting harder to escape the conclusion that there’s a pattern to Romney’s behavior, that he has a real problem understanding and caring for those with whom he can’t easily identify. As Amy Davidson writes, “This story [of bullying a gay kid] is resonant because one can, all too easily, see Romney walking away even now, or simply failing to connect, to grasp hurt.” That may or may not be a fair conclusion—we are none of us mind readers—but given what we know about him, it’s certainly a reasonable one.

The additional problem that Romney faces is that he’s such a bad politician that he can’t even convincingly fake the empathy when not talking to his rich donors.  And we (most of us, anyway) are so easy to deceive–especially if we want to be deceived!   President Reagan was known at the Great Communicator, but recall the essay by Oliver Sacks in The Man Who Mistook His Wife for a Hat, recounted here:

In the mid-eighties, Sacks studied the reaction of people with aphasia as they watched a televised speech by the actor-turned-president. Despite being unable to grasp the skillful politician’s words, the patients were convulsed with laughter by his bogus expressions. As Dr. Sacks explains,

“One cannot lie to an aphasic. He cannot grasp your words, and so cannot be deceived by them; but what he grasps, he grasps with infallible precision, namely the expression that goes with the words, that total spontaneous, involuntary expressiveness which can never be simulated or faked, as words alone can, all too easily.”

“It was the grimaces, the histrionics, the false gestures and, above all, the false tones and cadences of the voice which rang false for these wordless but immensely sensitive patients. It was to these (for them) most glaring, even grotesque, incongruities and improprieties that my aphasic patients responded, undeceived and undeceivable by words.

This is why they laughed at the President’s speech.”

Conversely, Sacks remarked on a woman with tonal agnosia who was also watching the address, but sat in stony-faced appraisal. Emily D., a former English teacher and poet, could have no organic emotional reaction to the speech but was able to judge it from a neural vantage point. Emily summed Reagan up thusly:

“He does not speak good prose. His word-use is improper. Either he is brain-damaged or he has something to conceal.”

Tell me about it! Sacks goes on to explain the implications regarding soothsayers and politicians:

“We normals, aided, doubtless, by our wish to be fooled, were indeed well and truly fooled. And so cunningly was deceptive word-use combined with deceptive tone, that only the brain-damaged remained intact, undeceived.”

I’d be interested in seeing the reactions of aphasics to a Mitt Romney speech.