A major subplot of my twisty thriller Pontiff involves the secretive Vatican Bank and a new pope’s desire to clean it up.  There’s a new book out called God’s Bankers by Gerald Posner that goes into 700 pages worth of detail on just this subject.  It’s been getting rave reviews all over the place, including the New York Times.  Much of what Posner talks

about is familiar to me from my reading when I was working on Pontiff — for example, this:

Posner’s gifts as a reporter and story­teller are most vividly displayed in a series of lurid chapters on the ­American ­archbishop Paul Marcinkus, the arch-Machiavellian who ran the Vatican Bank from 1971 to 1989. Notorious for ­declaring that “you can’t run the church on Hail Marys,” ­Marcinkus ended up ­implicated in several sensational scandals. The biggest by far was the collapse of Italy’s largest private bank, Banco ­Ambrosiano, in 1982 — an event ­preceded by mob hits on a string of investigators looking into corruption in the Italian 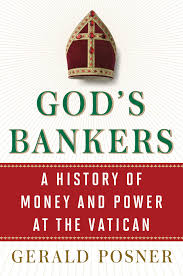 banking industry and followed by the spectacular (and still unsolved) murder of Ambrosiano’s ­chairman ­Roberto Calvi, who was found hanging from scaffolding beneath Blackfriars Bridge in London shortly after news of the bank’s implosion began to break. (Although the Vatican Bank was eventually absolved of legal culpability in Ambrosiano’s collapse, it did concede “moral involvement” and agreed to pay its creditors the enormous sum of $244 million.)

But I didn’t know this part, which seems too improbable to put into a thriller:

In one of his biggest scoops, ­Posner ­reveals that while Marcinkus was ­running his shell game at the Vatican Bank, he also served as a spy for the State Department, providing the American ­government with “personal details” about John Paul II, and even encouraging the pope “at the behest of embassy officials . . . to publicly endorse American positions on a broad range of political issues, ­including: the war on drugs; the ­guerrilla fighting in El Salvador; bigger defense budgets; the Soviet invasion of Afghanistan; and even Reagan’s ambitious ­missile defense shield.”

I don’t suppose I’ll have the time or the energy to read the book.  The story makes wonderful fodder for thrillers, but it’s pretty depressing to realize that this is real life.